Hedonist: someone motivated by desires for sensual pleasures

It’s been a while since I’ve posted anything other than recipes.  Recipes, which I’ve not really been following that well.. to tell the truth. This past two months, I’ve been lazy and just doing the things that I feel like doing.

I can’t really explain why other than it’s easier.  I got on the scale this morning… it took me almost a week to work up the nerve to do so.

It could have been worse.  I expected worse.  A month ago, I was 148 so all told, this really ain’t too bad. But it’s the wrong direction.

I did pretty good today.  I’ve gotten to where I really crave something sweet in the afternoon.  I’m going to have to bring some sugar free puddings to work to help curb that.

I have gotten a bit of knitting done at least.

A Turn a Square Hat 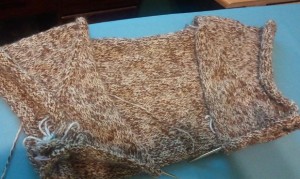 A Good Start on my Somewhat Cowl

One last thing to post.  I posted a recipe for my Sausage, Escarole and Beans.  Very yummy.. Very Easy

One thought on “Hedonistic Behavior”