Let your kidneys hang from your earlobes

I’m sitting here trying not to have a full on panic attack, eyes leaking, hands shaking…   can barely see what I’m typing but I need to get this out.

I don’t like strangers touching me.  I don’t like hugging people that I don’t know. I’m not a hugger. I’m not a toucher.  I have boundaries dammit and they should be respected.  People I’ve worked with for 10 years ASK before they hug me.

It is not ok to touch someone without asking.

I don’t care if you are yoga instructor, a doctor, a dentist, a coworker, neighbor, butcher, baker or candlestick maker.

IT IS NOT OK TO TOUCH SOMEONE WITHOUT ASKING.

But let me back up a bit.

Firstly, I don’t know what anatomy class this instructor took but I sure as hell cannot figure out how to push my “outer thighs to my knees”, “rotate on my groins” (yes, GROINS)  or “let my kidneys hang from my earlobes”.

If there was a “shit yoga instructors say” drinking game, I’d have been loaded.

So, we are doing this thing where the students lay on their backs with their knees up and heels down. That is a very vulnerable position.  To open your belly up to the sky requires trust.  Just ask any dog who’s been alpha rolled.

Evidently, my ribcage wasn’t spread enough, or something…. so the instructor STRADDLED ME without any warning, bent over,  her shirt hanging open so I can see right down it to her boobs… which where hanging a foot in front of my face and she but her hands on both sides of my ribcage and slid me up the mat.

I had a melt down.

A small internal meltdown.  Tears started leaking out of the corner of my eyes.  But I tried to hold it together.

I know for a lot of people this seems like NBD but not everyone has the same boundaries.   Some people have issues.   Straddling  someone is so personal and intimate.   All I could see was her boobs, her now giant head and a bit of ceiling around her.  That’s fucking scary and I felt trapped.

We move on to this thing where you put your foot in the air and wrap the strap around your heel.  She took the tip of her finger and  drew a cross pattern on my heel where the “heel could explode into the Universe”. (I wish I was making this shit up.. oh and DRINK!)

By this point, I’m not doing well.  I’m trying to figure out how to graciously get out of there.. and failing miserably.  There is an hour left to class.

Then her assistant takes my foot that is on the floor, the one I can’t see.. and pulls on my leg.

Rainman would have been proud.

When I took my Reiki classes, the first thing.. the VERY FIRST thing I learned was to ASK to touch.  I would be putting my hands on someone.  You don’t know where that person is in their space and it show respect for that person.

I would have been ok if she asked.  Maybe not great because chances are pretty good, I wouldn’t be comfortable, but I would be able to make a decision.  Not buried in boobs without warning.

What happened to “Namaste”.. that “honoring the divine within” the other person?  Isn’t respect and asking part of honoring someone?

So yeah…  now I feel better.. and I feel more calm.. and I’m sure some of you think I’m overreacting.. but here is the thing.

It’s my reaction to have and it’s valid.

My feelings are valid.

My motherfuckin BOUNDARIES are valid.

If you take away anything from this.. it’s that it is not ok to touch someone without asking.  Be it a small human, a grown up human, an elderly person, a dog, a cat, a hamster … show respect for your fellow creatures.

3 thoughts on “Let your kidneys hang from your earlobes” 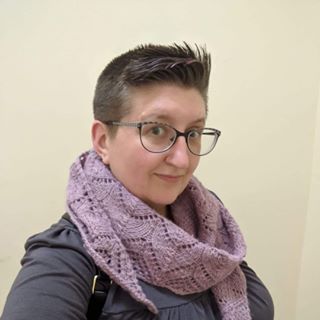 I've been blogging sporadically for years.. don't expect much here..

Friends, I am concerned that maybe some of you are not aware that the Oatmeal Scotchie is the best known cookie in the Universe and I feel you should go get yourself a bag of butterscotch chips and make them immediately so you can understand the glory of this cookie.
Overall, I'm pretty happy with this "Cream of Wheat" porridge bread (recipe: @wordloaf ). I totally had to screw around with both bulk fermentation and final proof times because I started late yesterday and honestly I don't have the best loaf pan, but the bread is fluffy, soft and delicious.
Me tryin to read a damn bag of chips to make some cookies.
YES! The foil cover worked!
When TF did they make this font so tiny?
This is me, wishing I bought that pullman loaf pan when it was in stock. #alluminumfoil #steam #breadbaking #loafpan.